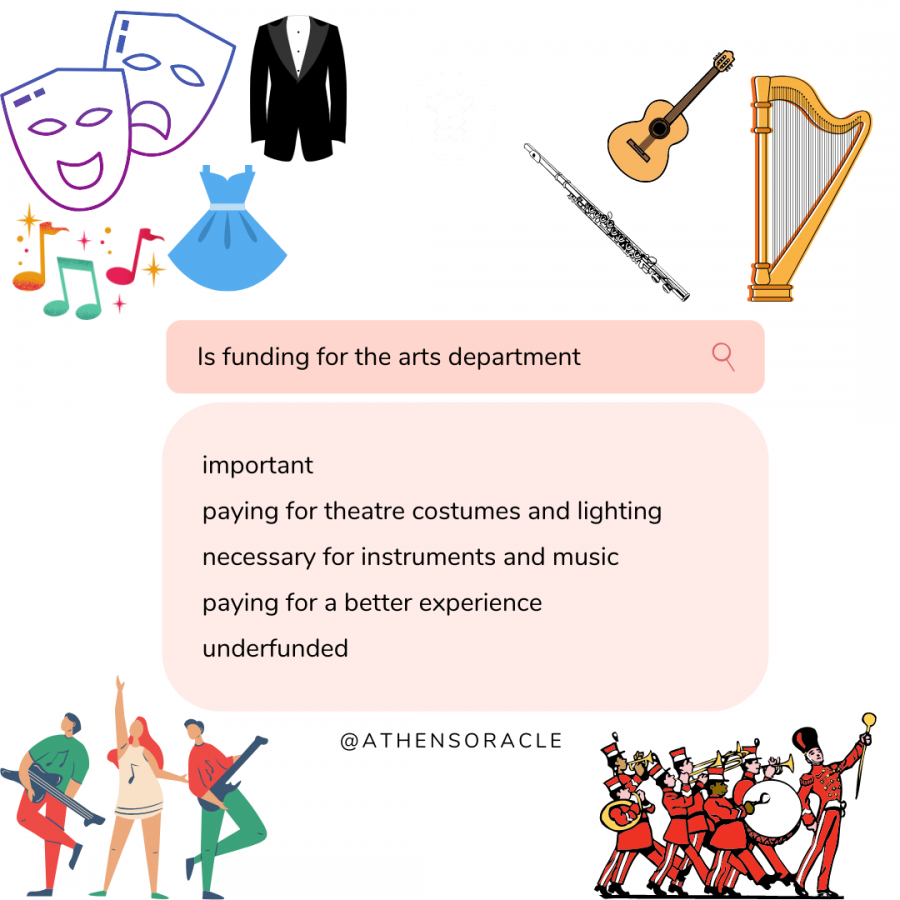 Underfunding the Athens performing arts department is a disastrous show 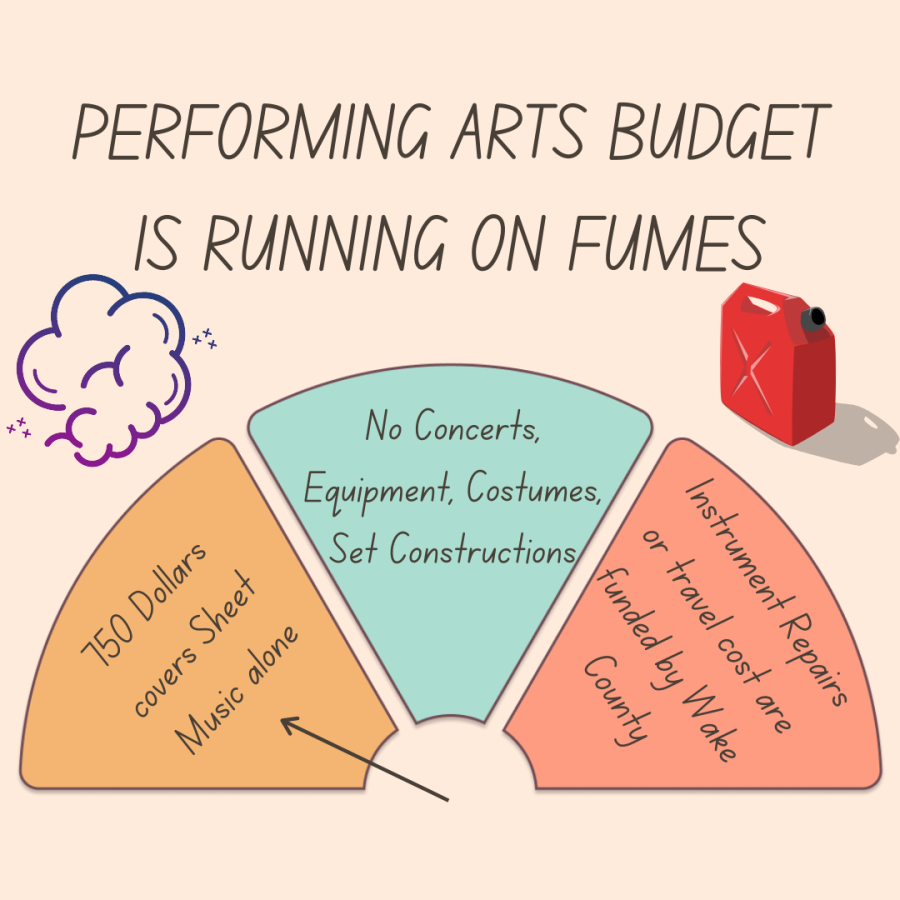 Performing arts program survives off of 3000 dollars per year

“We each get 750 a year,” said Micheal Santangelo, choral director.

Within the chorus department, that 750 dollars from Wake County covers sheet music alone. Not the attire students wear for concerts, not the lighting and projections for accrediting songs, not the sound system, microphones, music theory education programs and studio musicians. This financial struggle is present in theatre, orchestra and band regarding set constructions, instrument repairs, costuming budget, playbill design, commuting to and from school for concerts and competitions and more.

“I think that $750 dollars is pretty measly. It’s not even enough to buy a single quality instrument. There’s a whole team effort that goes into programming the arts, which requires money no matter how you look at it,” said Janie Hill, junior and front ensemble section leader.

Looking towards the awards of Grand Champion Marching Band, Triangle Rising Stars Best Musical, Superior Music Performance Adjudication ratings, the standing ovations of crowds and the character of dedicated students, contradicts the funding allocated towards these programs. All of these students, all of these thankless teachers are worth 3000 dollars a year, 750 per department as allocated by wake county?

“I think the county needs to step up and provide for students because we can’t just survive off of STEM classes and ‘due at 11:59 pm’. While those things are important, we need the arts to enrich our education and inspire us to keep going,” said Hill.

Going beyond the confines of a limiting budget, performing  arts students have developed strong work ethics complimented by their resourcefulness. Students have applied their drive towards compensating for missing money. The theatre department, for example, saves plenty of costumes, props and set pieces to be reused in future productions. The trash can prop from the 2018 production of In the Heights doubles as a functional trash can, often used for unsalvageable debris from set construction. The raised platform from the 2020 production of 9 to 5 framed a cellist in the 2021 Spring Cafe chorus concert. A myriad of costumes were reused in the 2019 theatre showcase Dancing through the Decades, as students wrote, directed, choreographed and starred in their own production. With barely enough funds to produce two mainstage productions, the theatre department has competed against other schools within the triangle and won, producing students who have been nominated consecutive times for best actor and actress in the Triangle Rising Stars regional competition. Though an underfunded arts department is not ideal, students and teachers alike have excelled under these circumstances.

“This year I raised $104 for the butter braids fundraiser for Chorus! I had my mom post on her Facebook that I was selling butter braids for chorus, and a couple wonderful supportive parents of Athens students bought some! The hardest part was driving around and delivering all the frozen packages to the families that ordered them,” said Joscilyn Tillotson, senior and vice president of the student choral board.

Fundraisers are an asset to the performing art departments, allowing them to perform, compete and improve through their earnings. The Athens Drive Marching Band is a fundraising machine participating in  over ten fundraisers each year.

“The lack of adequate funding we get from Wake county has helped our performing arts programs to become much more self reliant than we would have otherwise. Consider for a second that the marching band gets less than $750 a year because the band department as a whole only gets that much, and Doc has to then split it again multiple ways, and yet we raised $60,000 from parking cars at the state fair alone this year. If that doesn’t tell you how much people care about this program, I honestly don’t know what does,” said Will Gerken, senior and field crew captain for the Athens Drive Marching Band.

Students have taken responsibility for their programs, giving their time to make performances possible. Getting out of their comfort zone, students have asked for monetary donations and performed for the community and peers in doing so. Chorus students arrange music for singing valentines every year, performing for classes as a fundraiser for the department. The marching band plays carols in front of Dewey’s bakery offering free music to the community and garnering support for the fundraiser.

“I have worked at the Athens Drive Band Dewey’s Holiday store every year that we have run it. I find this fundraiser is a better option than other methods. I don’t like asking people for money or going door to door selling things, so working here is how I can fundraise in a way that I like a bit better,” said Kenlee Fischer, senior and Baritone section leader.

“I helped work the dip ‘n dots concession stand for the marching band at PNC arena. It was a very fun experience, and frankly I’ll be a bit sad to not be able to do it again after I graduate. The feeling of knowing that all the smiles you give to the kids who come by to buy a cup of ice cream are not coming from just you, but from the entire band,”  said Gerken.

Though fundraisers require effort, they also raise awareness of performing arts in the community. Several of the fundraisers at Athens have become traditions at school and within the triangle. The marching band is playing carols for the community, while running a Dewey’s Bakery fundraiser in the plaza. The chorus department’s Singing Valentines fundraiser is a schoolwide tradition as student arrangements are purchased and performed throughout the school. The theatre department has sent cast members to Carolina Preserve Retirement Community, and International Thespian Society Members dressed up as Whos and served hot chocolate for a community event, sponsored by the Ekklesia church, here at Athens.

“All of these programs have a massive impact on the community. As a band student and a member of Tri-M, I got to play different pieces of music for a retirement home of veterans on Veterans day, and the expressions I saw were of just an unfathomable appreciation, and that only made me more proud to be a member of this band,” said Gerken.

Giving back to the Athens community, building shelves for the band room, repairing storage units at school, composing choral arrangements, donating choral gowns, caroling for students and teachers in winter months and offering free concerts. Despite a lack of financial support from the county, these students have learned to help one another and share their gifts with community members.

“In chorus, we have been able to perform at ECU, win statewide competitions, sing at local venues, carol around the school, and we plan to carol at nursing homes or parks in the very near future,” said Tillotson.

The result of our underfunded performing arts program is a ragtag group of students willing to work hard and give back to the community.

The flower that is blossoming in these such terms is beyond the beauty of any other flower in this world. Why would someone not want to fund a place where dreams are born, and feelings of inspiration and creativity blossom much like a flower? That remark was quite dramatic, but it shares the main idea of the performing arts department at Athens drive: dramazicing is beautiful.

Whether it be art of theatre, the art of music or in basic dynamic terms, the art of art itself. Each of these elements all fall under the performing arts department at Athens.

Reciting back to my previous question, there should not be an answer because that should not be a question. Unfortunately, the reality is the Athens Drive arts department is underfunded. When not enough money is provided for this program, it causes several issues to arise.

No money equals no progress. To run and put on a theatre play takes a lot of steps to get to the final product that you see on opening performance night. A chunk of those steps require money. To play music on instruments at a football game requires money. Painting on paper, sculpting molds, canvases and other materials cost money.

The cast of a play has to get in character to properly perform for their play. Imagine you are sitting in an auditorium, moments away from seeing your little sister playing the villain in a theatre performance, then all of a sudden, her part is in motion, and she comes out from behind the curtain in her regular clothes she was wearing when you saw her this morning. I would be in shock. That would not be a proper performance. However, if the theatre program was not funded, they would not be able to afford costumes.

What if you are an art teacher who is in the middle of class trying to teach students how to use watercolors and how to get different shades and consistencies with them, but you do not have any paints, brushes or even proper paper. Without funding, none of those materials can be provided for students to learn.

There are a lot of sports here at Athens Drive, yet the football team and occasionally another team gets the pleasure of having the Athens band play at their games. In my own opinion, listening to the music of fellow students makes the experience of any sports game more enjoyable. For the amount of time the band spends practicing and rehearsing their music, they should be able to play at more than just football games. Perhaps having them there would attract more students, too. If the arts department got more funding, that might mean they would be able to perform for other games.

Saying that one prefers not to have the arts department and their many categories unfunded is simply like saying you do not want money. To such extent of that statement, it does make me curious as to the reason that stands in the shadows of the answer to the question I asked in the beginning.