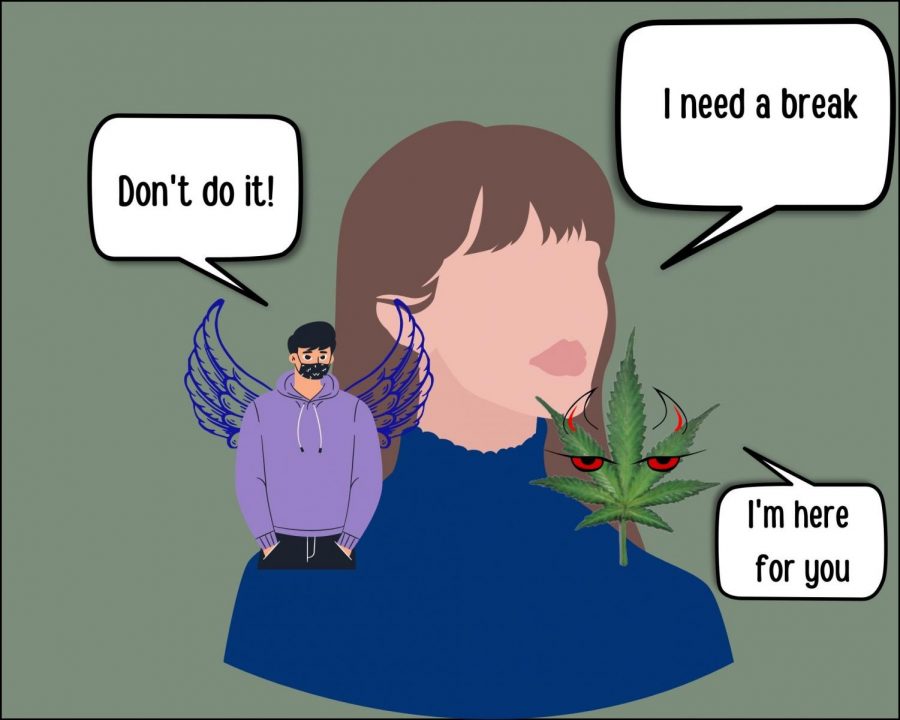 Jane Doe battles with the influence of her friends, John Doe, and the positive effects of marijuana on her life.

Parallel worlds living side by side, weed smokers and non-smokers alike. Worlds collide when two students stand on opposite sides of the same argument: should marijuana be legalized?

“I use it as a coping mechanism.”

She sighs of relief. Jane Doe, a student here at Athens, suffers from depression and anxiety. After a long week of stress, family problems and insomnia symptoms, she settles down to throw the weight on her shoulders into a self-designed cloud of smoke.

When smoking marijuana, inhibitory neurotransmitters embedded in the brain that restrain the connection between nerve cells and the brain, called GABA, are aroused. Meaning, smoking weed calms the nerves and, therefore, stress. To the 70% of teenagers in America who identify anxiety and depression as a major issue among themselves and their peers, the stress-relieving properties of marijuana are the most appealing aspect of it.

From other standpoints, however, marijuana is not seen in the same light.

Marijuana has been labeled a “gateway drug.” The first step into the world of recreational drugs. The start of a life of addiction. Though smokers may shake their heads at the sound of it, it is a valid argument.

Without self control, self-medication can very realistically turn into an addiction and, this, Jane Doe knows.

“It’s a personal experience. It always comes down to the individual,” said Jane Doe. “But, weed turning into hardcore drugs? I don’t see that happening [for me].”

She is not as careless as one may think and, despite public opinion, neither are other teenagers her age.

Before her journey into self-medication began, Jane Doe took to the web to investigate the ins-and-outs of the drug. She wanted to know what she was putting into her body.

Now, with the help of her dealer, she safely takes advantage of all that marijuana has to offer.

“Marijuana is given a bad reputation,” said Jane Doe. ”It would take a lot of weed to have a bad experience [and even then] you can’t overdose from it.”

But marijuana is a gateway drug of other sorts.

Due to rigorous legislation, smoking weed can become a gateway into a life in prison. For some people, this truth is more realistic than it is for others.

Jane Doe, a half-white, half-latina, young woman may get into serious legal trouble for her smoking habits, but people of other races deal with even harsher penalties.

Marijuana has a racist history. It is the face of the ‘War on Drugs’, a systemic, government-enacted initiative used as an outlet to target brown and black Americans. If caught with possession of marijuana, brown and black Americans are about 4 times as likely to be arrested than white Americans. The sentences only get longer with each arrest, until a young black man is in jail for nearly life for the possession of marijuana, while a young white man gets off scot-free for the same offences.

From any angle you come from, addiction is met with jail time.

This is why it is so important that marijuana is legalized.

When worlds collide, weed smokers and non-smokers alike, you should stand with Jane Doe.

The benefits outweigh the costs.

…Or not to weed