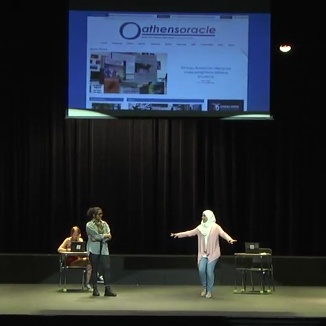 Danya (Monee Sakr) and Basira (Amena Matcehswala) discuss how Danya could contribute to newspaper. The scene was written by the Oracle's very own editor-in-chief Amena.

Honors theater students as their final project this year, instead of taking an exam, made their very own student-led and written play. Written by nine honors students– Amena Matcheswala, Jorie Mills, Alex Easley, Ashanti Barnes, Priscilla Pallazo, Lisey Pillay, Jayla Rushin, Ahnoki Thyambugula, and Alana Williamson– the Jag show was a 30-minute show put on by a large theater-student cast at Athens Drive on May 23, 2022.

“We made everyone’s voices heard in a surprisingly successful way,” said Senior Amena Matcheswala, who was one of the writers of the Jag Show.

The feature show was a story surrounding Athens, where a few tour guides were given the task of leading students around the school. The tour guides, (Syed Abbas, Lisey Pillay, Ahnoki Thambugula) were trying to organize students for tours when they realized that their groups and schedules were never printed out. They all split up the students by last names, and go off into the hallways to begin their haphazard tours. They all incidentally meet in the math hallway, causing a jumble in the middle of the math hallway, causing the tour guides to be separated from the groups. They try to find the students, but they get called away to help animal science teachers to wrangle chickens that had gotten loose. The show features the students’ journey through Athens Drive, where they stop periodically at locations featuring various Athens clubs, classes, and activities.

The first stop on the student’s journey around the school is the art classroom. The group investigated the different mediums and impressive artwork while students Danarius and Astra discuss the potential for growth they could find in this room. The show featured some valuable real-life elements of Athens art classes, such as pieces created by real-life art students at Athens, who graciously let us use the Board as a background for the show. The set for this scene features a large, gray display board used by the art department to showcase student work. It featured various pieces created by the real students of Athens from the past year. This scene took place in an art class that’s actually offered in Athens.

“We were very grateful to Ms. Hinton for allowing us to use the boards and display real talent here at Athens. In doing so it made the message we’re sending about the art classroom feel that much more real,“ said Matcheswala.

Tomni (Clare Roth) and Astra end up in the yearbook room. The classroom was very eye-catching, as Athen’s yearbook room is characterized by many pieces of fun-looking tech, such as MacBooks around the room. Tomni decides that they want to join the yearbook crew after seeing all of the cool things they can do. They find a note left by the tour guides, that when deciphered by Tomni, leads them to the gym.

Meanwhile, in the newspaper classroom, Danya (Monee Sakr) and Danarius are introduced to the world of newspaper class. Danya is a character that is characterized by her long speech about family history and wealth. She is contrasted by Danarius, whose family is comparably not as well off. They are foils for each other, representing the variety of backgrounds represented at Athens Drive.

In the end, everyone ends up in the gym where they all tell Mr. Katz that they had a great time. He tells them to have a great freshman year, and they all come back for bows.

All in all this show went by well without any problems or complications. Several students expressed interest in doing another student-led show like this again in the future. If you would like to watch the video, the link is here and on our youtube!