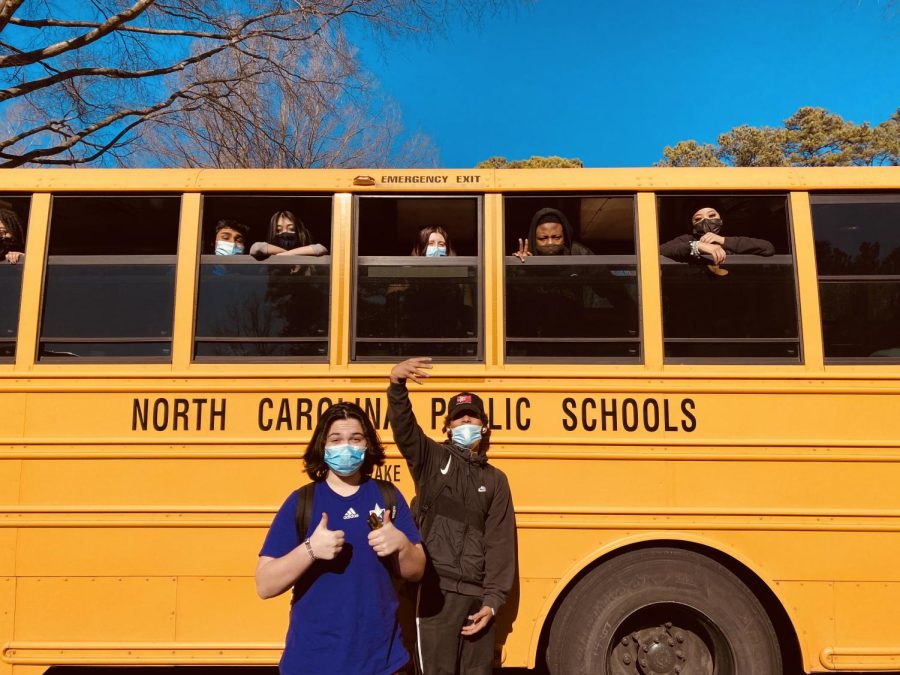 The students of Athens Drive High School are about to go home on a Friday after a long week of school. Some students have had issues this school year getting home due to a lack of bus drivers.

All young children learn the song, “The Wheels on the Bus Go ‘Round and ‘Round,” loving the hand motions and singing, but not realizing the important responsibilities related to those charged with driving the buses to safely make those wheels go round and round.

Last fall, hundreds of Wake County school bus drivers went on strike, protesting long hours and low wages. This situation created staffing shortages and stress for many parents struggling with not just how to get their kids to and from school, but battling huge carpool lines. This affected many students and staff, but was particularly challenging for parents.

According to Wake County Public Schools, bus drivers must not have any moving violations on their driver’s license and must not have any DUI’s on their records. Bus drivers are responsible for the safety of the passengers as well as other drivers on the roads while maintaining the strict time limits they must follow.

Gwindolena Brown, or ”Ms. Bus Driver” as her students call her, has only missed one morning the entire year due to her bus breaking down. None of her students know her real name or what she looks like under all of her Covid protective gear she wears every day to protect herself and all of the students who depend on her for transportation five days a week. Brown began driving a bus last August.

“You have to do the CDL test and also the CDL class that’s provided by Wake County [to become a bus driver],” said Brown.

Bus drivers are responsible for getting students to school and back home. Another part of their job is to be compassionate towards the students. At the end of a long day of school, students are glad to go home.

As much of an impact as it has on students, it also affects the staff who have to do a lot of work to give this transportation option to students. Steven Katz, assistant principal, is a prime example of hard working staff. Katz, helps out by giving tardy  passes in the morning and provides backup for Donti Coats, administration, if he can’t make it.

“I will report the buses coming in and will communicate with transportation on buses that are late or don’t have drivers. My main job in the morning is carpool,” said Katz, “Generally, we’re pretty good, but we do have some double routes occasionally, and we do have some late ones.”

There are lots of absent bus drivers due to the strict covid protection rules. Bus drivers are coming down with Covid and other illnesses, just like everyone else in the school. Some bus drivers are also choosing to be absent because of low wages, long hours, and lacking benefits. That’s a problem for many students that have to ride the bus to get to school.

“The most difficult thing that the bus drivers do is a combination of things. They drive while also supervising students and remembering the routes they have to take, being kind and listening to students, and they all have to take all that in to do their job,” said Steve Mares, Athens Drive Principal.“The thing that makes the bus drivers important is that they deliver kids to and from school.The reason we should appreciate bus drivers is because they take us to school every day.