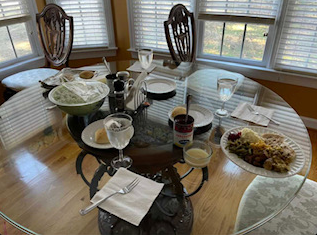 Katie Beth Cornell shares pictures of what her Thanksgiving table consists of this year. Meals vary culturally, but turkey tends to be a staple across the board.

Celebrating the many faces of Thanksgiving

Thanksgiving is celebrated on the last Thursday of November every year. Thanksgiving is a day to reflect and share what we are thankful for. But it’s also important to remember the genocide and harm that was forced upon the Native Americans because of colonization.

It began in 1620 when The Mayflower set sail for “the new world” and landed in the Massachusetts Bay carrying 102 passengers, now better known as Pilgrims. The Pilgrims soon discovered that they landed in the land of the Wampanoag tribe. The two groups did not get along well, resulting in the loss of both Wampanoag and Pilgrims. The Pilgrims also lost most of their people due to malnutrition and a very brutal winter. That was until they were greeted with Squanto, a member of the Patuxet tribe that spoke good English. Squanto taught them how to harvest their crops, avoid poisonous plants, catch fish, and many other survival skills. He also helped them forge an alliance with the Wampanoag. In the fall of 1621, when the Pilgrims’ first harvest was proved successful, Governor William Bradford called for a celebration. He organized a celebratory feast and invited the colony’s Native American allies, including the Wampanoag tribe, where the Pilgrims and Native Americans shared an autumn feast in hopes of peace between them all. Although the Pilgrims did not use this phrase at the time, this festival is known as the “first thanksgiving” lasting for three days.

Although it is not known exactly what the menu was for “the first thanksgiving,” people traditionally celebrate with the main dish of turkey and several side dishes including mac n’ cheese, mashed potatoes, stuffing, green beans, and many more. Families and friends gather together and have a feast, sharing what they are thankful for. In some families, the guests would bring some side dishes or desserts.

At Athens, students and families celebrate in many different ways. According to a poll, most students at Athens celebrate by baking and eating pies both the day of and before Thanksgiving.

“Our family’s tradition is to have at least one slice of pumpkin pie every Thanksgiving,” said Katie Beth Cornell, sophomore.

Before they eat the feast, everyone in the family says at least one thing they are thankful for. Cornell keeps a journal and writes down everything she is thankful for.

“I think that it’s really important for me to do because it grounds me and makes me realize how much I have in my life that I am thankful for,” said Cornell.

Another way some people celebrate is by doing community service. “I do community service because I feel that people in our community deserve to feel like they belong and that they have people who are willing to look out for them,” says Cornell. Most of the community service she does is packaging and sorting food for those in need.

“I think that everyone should do community service because we are all part of the community, and we need to look out for each other,” said Cornell.

Thanksgiving is more than just stuffing our face with turkey and all sorts of side dishes. It’s about giving thanks and being grateful for everything you have. People all around the world and here at Athens celebrate differently. There are many families around the world that don’t have a roof over their heads or a table to share a feast.