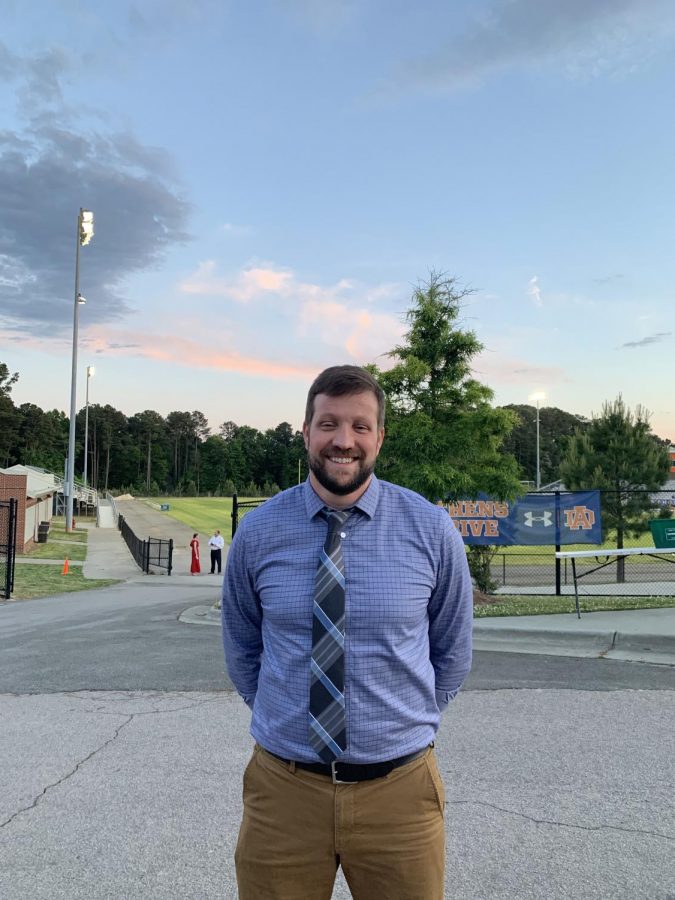 The twenty-first century has been a remarkable era for new technologies such as smartphones, self-driving cars, space rovers and more specifically, drones. Drone innovation, also known as unmanned aerial vehicle technology (UAV), is the inspiration behind Shane Barry’s recently developed club. Barry, a STEM educator at Athens Drive Magnet High School (ADMHS), teaches AP physics and AP Capstone. These classes, filled with future engineers, scientists and mathematicians, contain many students who are interested in drone technology for either recreational or educational purposes.

“I was introduced to the founder and head pilot of 910Drones with the thought that he could be a guest speaker for the STEM Academy. His expertise led to my own interest, and following the guest speaking event it was clear that many students had interest as well,” said Barry.

There are many club organizations at ADMHS, one of which is the National Technical Honor Society (NTHS). Many STEM students joined NTHS in hopes of furthering their opportunities of a higher education in the science and math realm, and in addition, the Drone Club will give individuals a chance to learn hands-on.

“When I was younger I always wanted to be able to fly a drone, so I saved up some lifeguarding money and bought one, and it was a really cool experience,” said Joey Bridgham, senior.

As the Club becomes officially established, it is important for students to know the goals and intentions of the group. Studying drone technology, engineering drones, and flying drones are all very different processes.

“The plan is to purchase a drone that will be owned by WCPSS and Athens Drive. From there, we may potentially purchase software associated with the drone to further advance its uses. The software purchase will be based on student interest,” said Barry.

By doing this, STEM students in the club will be able to observe the technology first-hand and understand the mechanics behind drones. They may also get the opportunity to expand their resources, and therefore knowledge, depending on the amount of student interest associated with the club.

“The main goal is to introduce students to the technology and the potential careers associated with it,” said Barry.

Drones are not only important for the use of pilots, but also for big corporations. Amazon, owned by Jeff Bezos, sparked a boom of drones in the big business industry, as talk of an Amazon Air Drone Delivery Service emerged. Since then, the list of companies using UAVs has grown astronomically. This has allowed the STEM industry to collaborate with the business world, meaning the number of technological jobs are on the rise.

“A drone club is a perfect introduction to those who may want a career in aviation, and I believe it could also inspire future aerospace engineers,” said  senior Victor Haxholdt.

Haxholdt is a part of the STEM Academy, and as a graduating senior, he says the Drone Club is an organization he wishes he could have participated in. There are many career opportunities relating to drone technology, and it is important to introduce students as soon as possible.

“It will prove to be a fun way to problem solve and get exposure to developing technological fields,” said Barry.