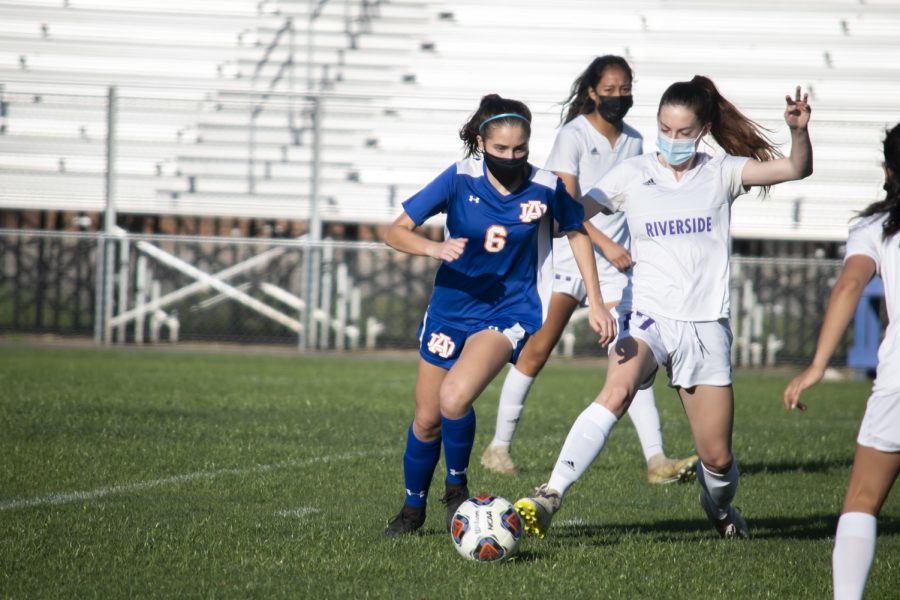 The Athens Drive Women’s Soccer team could not have asked for a better season. Currently first place in the conference with a record of 15-1-1, the team’s only loss came in the conference tournament’s final. Having won their first and second games in the playoffs, a state championship could be very possible.

Coming off of a year where their season was cut short due to COVID-19, they have taken nothing for granted and cherished every moment. This has led them to work harder in practice and it has paid off in games.

“I think that after having last season taken away from them, they realize how special every game is this season,” said Coach Meryssa Weyer.

This is a very tight knit team with a lot of chemistry. Off the field, they hang out and have team sleepovers to promote team bonding, and on the field they play together and move the ball smoothly. The time they spend together, whether as friends or as teammates, ultimately contributes to their success as a team.

“Obviously we have a lot of talent, but I think what makes us so successful is our team dynamic. We have a really great group of girls this year, plus our team is small, so we’re really close and have a lot of fun playing together. We play for each other every game,” said Kyra Gallagher, senior captain.

Leading the team in points is Junior Laura Cate Westerbeek with 10 goals and six assists, followed closely by Sophomore Francesca Brady with 11 goals and two assists. Despite there being several standout players on this team, it is the team effort that delivers them success at the end of the day.

In their senior night game against Riverside, Athens Drive was able to secure a 1-0 win for their last home game of the regular season. Brady came off the bench to score the winning goal early in the first half, and the team was able to battle it out for the rest of the match to seal the win.

“The other teams in the conference are very good, but our willpower and grittiness set us apart. We’ve always been the underdog, so we’re used to working hard for every ball and having teams underestimate us,” said Gallagher.

Their focus now shifts to the upcoming conference tournament and playoffs. They will be in a good position for each competition since they are currently sitting in first place in the Triangle 8 Conference.

“We hope to take each game one at a time, take nothing for granted, and appreciate every opportunity we have to play and continue this special season,” said Coach Weyer.