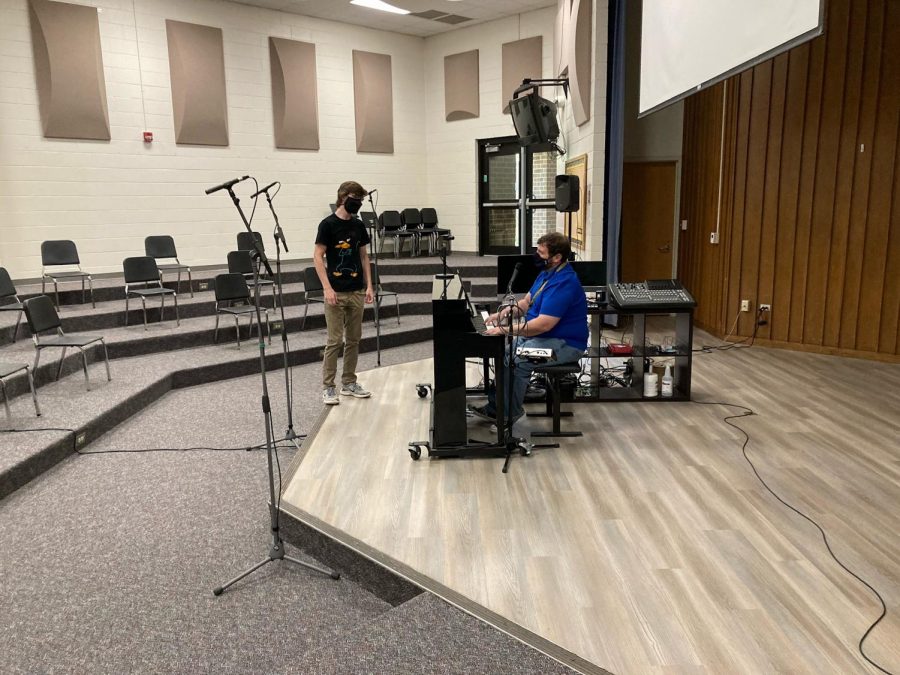 Micheal Santangelo, chorus teacher, and cast member Will Wakeford rehearse one of his songs for the production.

The ghost light is being stored away at Athens Drive High School (ADHS) and their students are ready to take to the stage again in this year’s spring musical: The Athens Drive Theatre Cabaret. Maneuvering around COVID-19 restrictions, the ADHS theatre department is, instead of choosing a single musical, honoring the last ten years of productions and allowing their actors to perform a slew of numbers from “Legally Blonde” to “Footloose” to “Little Shop of Horrors.”

“The past year I’ve felt unproductive and isolated because I can’t go out and get involved in things the way I used to, so I’m really excited to finally work together with others to create something that feels personal and complex! I can’t wait to feel that sense of community again,” said Amena Matcheswala, junior cast member for this year’s play.

The arts have taken a hit with the mandatory lockdowns that COVID-19 brought and are still suffering today, even as the world is beginning to open up. Despite sports being given the “ok” to commence, both nationally and locally, on-stage productions have only recently been given the thumbs up. A half thumbs up, that is. Broadway remains dark and high schools that are allowing their students back on stage are few and far between. Additionally, not all schools have the money or support from their administration–like sports teams do–to continue artistically, making the transition back to normal almost impossible.

“More than anything, theatre is a way to bring people together. Usually after tough times is when the arts thrive, so I think that says a lot about how much people need art to express themselves and feel alive. So if we can keep that expression going throughout a time when people are feeling alone, then I’m sure that the togetherness we show will help people to remain optimistic and appreciative of what we have, bringing us together even if we have to be apart,” said Will Wakeford, president of International Thespian Society at ADHS.

Luckily, the theatre department at ADHS, run by Ashylnn Hayes, is well-supported and thriving despite such difficult times. The cast and crew of the Athens Drive Theatre Cabaret will gather after school to rehearse and prepare for the production. Without the allowed audience of around 500 that the Athens auditorium usually holds, the department has decided to hire a camera crew to tape the final product. Students will be allowed to invite two people to watch on the day of filming, though, to simulate a normal performance environment.

“The theatre world has always had to adapt and improvise, so this past year has just been another part of that, it’s just that the obstacle is a little bigger this time. We’ve had to find ways to make sure the virtual and in person learners can both do their parts at school or from home to create something cohesive. It’s amazing to see the hard work and willingness to adapt,” said Matcheswala.

Additionally, to stay adherent with COVID-19 restrictions, the spring musical will not have any of its usual large ensemble numbers. Aside from solos, only duets and group songs are permitted. With this, there is also no scene work or prop design, although acting will still be worked on and instructed through for those taking on a character. Crew holds responsibilities geared more technically this time around (lighting, sound, video work, etc.), too.

“Now more than ever we all need a sense of community and purpose. Nothing does that better than theatre, where the entire concept of ensemble is to pour your soul into a production with so many people at your side,” said Matcheswala.

Most of ADHS theatre’s success and capability stems from Hayes’s and the department’s professionalism and experience; their Best Musical award from Triangle Rising Star (TRS) in 2019 proving this so. This year, the department’s goals remain high in regards to TRS and expect to send some of their best actors to perform and compete, and maybe bring home a win or two.

“Remaining productive has been a difficulty all the extracurricular groups have had, and personally I think we’ve done a great job walking the line of still being active as a community without overexerting ourselves or the students. We’ve been able to run fundraisers and plan events for the future, and even create an entire fall production, but I’m also proud of the program for continually understanding that things are difficult for kids this year, and they sometimes need space or just a place to support them unconditionally,” said Wakeford.