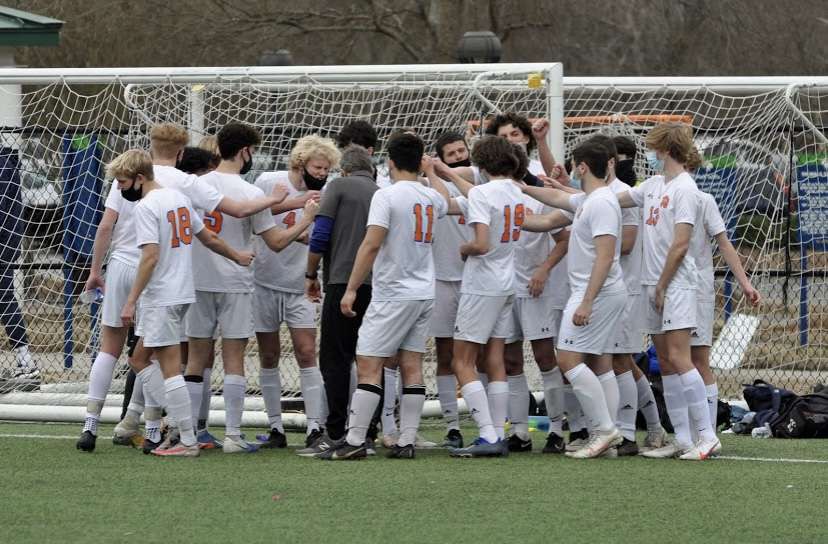 The ADHS men's soccer team huddles during halftime of a 3-1 win over Panther Creek.

The Athens Drive men’s soccer team won their game against RJ Reynolds high school by a score of 3-1 in the first round of the NCHSAA 4A playoffs. Senior attacker Zach Peterman led the way by scoring a “hat trick,” with one goal in the first half and two in the second half to put the jaguars on top.

“On the bus before [the playoff game], we could tell that we were more nervous than usual, but also much more excited to go out and compete,” said Peterman.

Peterman has been on varsity since his junior year and leads the team in goals this year, with 10. During the span of the season Peterman was nominated a runner up for the News Observer Player of the Week. Peterman shares a special connection with fellow senior, Sean Herbst. Herbst leads the team in assists, with seven and has played with Peterman for four years.

“On our third goal, it was like I didn’t even have to look. I knew [Peterman] was there,” said Herbst.

Peterman and Herbst have been playing together for four years, and continue to work by each other’s side as they navigate through playoffs. This amount of time allows them to learn each other’s movements, skills, and weaknesses.

“It’s like I already knew where he was… We have this kind of chemistry both inside and outside of the field,” said Peterman.

The team ended the season with a 9-3 record and finished second in the Triangle 8 conference. This includes a six game win streak where they outscored opponents 20-3. Their overall record has led the team to place 10th in the West bracket for the 2020-2021 4A Men’s Soccer Championship. Peterman was also named conference player of the year after recording ten goals and three assists. In addition, Herbst, along with senior Josh Burkhardt, were named to the Tri-8 all-conference team for their performance this season.

“Overall we have progressed a lot throughout the season, we are way better now than when we started,” said Peterman.