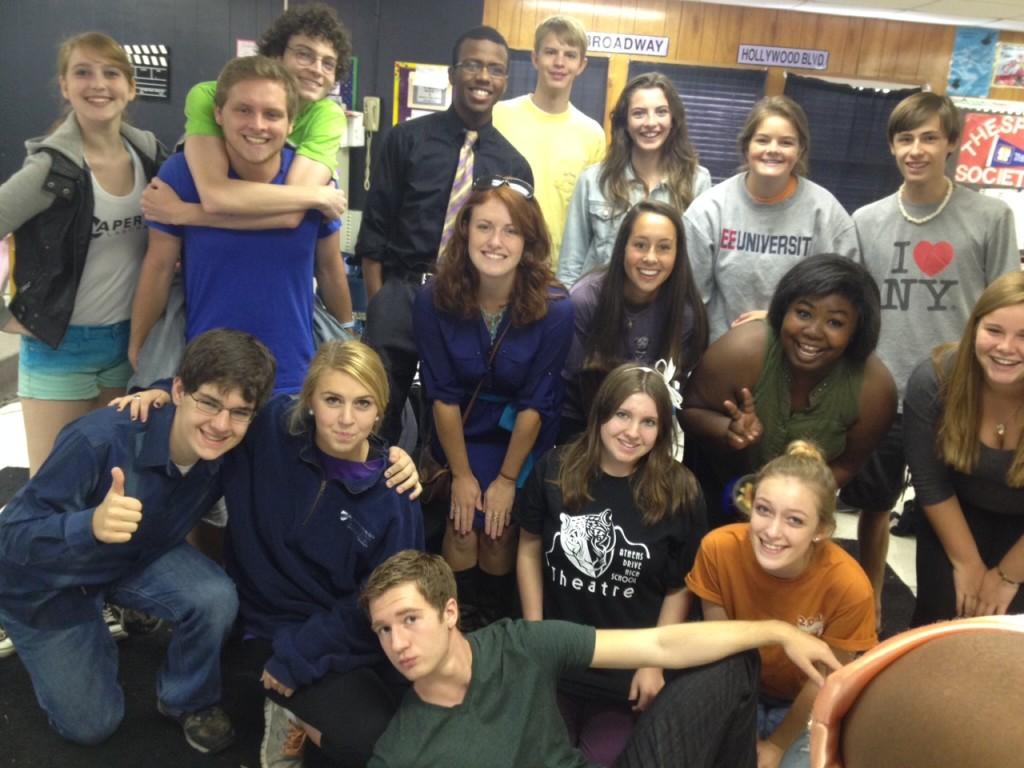 The space between the heavy blue curtains, on the cool black stage of Athen’s auditorium becomes something of a second home to a select group of students for a few months every year. With after school rehearsals nearly everyday, a tremendous amount of work goes into the production of a show and there are things to do in all areas of interest. Students at Athens Drive High School are welcome to join the theater department. Those participating in this diverse extracurricular have the option of auditioning to be a member of the cast, or signing up to join the tech crew and helping out after school.

During school, students have the opportunity to take Technical Theater and Theater Arts levels one through four. However, they do not have to take a theater class in order to be part of a show.

“We encourage having people that aren’t in the classes because sometimes you can’t fit it into your schedule. So there’s a lot of talented people out there that don’t always get in theater classes because of other classes they have to take,” said Burgandy Trimmer, theater teacher.

The theater department produces a play in the fall and a musical in the spring. This year’s play will be Ken Ludwig’s Lend Me a Tenor, a comedy taking place in the 1930s, the show focuses on a couple who own a hotel. A famous Italian opera singer and his wife are coming to stay at their hotel because he will be performing an Othello at their local theater. The singer ends up taking too much of his medication right before his performance, leading to the ensuing of trouble and hilarity.

The show will be performed at seven p.m. Nov 21, 22 and 23. Auditions will take place Sept. 18 and 19 after school in the auditorium. Audition and tech forms can be found on the bulletin board at the end of the band and chorus hallway.

“If you’re interested in theater, the best thing to do is to just give it a try and this goes along with a lot of aspects of your life. If you just put yourself out there you’ll be really surprised with how much you can actually do and theater can really bring that out in a lot of people,” said Matthew Washington, senior.

Washington has been in all six shows during his four years at Athens. In last year’s spring musical “Aida,” he shined alongside the lead and first time actress, Briana McManus, senior.

“Even if you’re scared to perform just get up there and do it because I was a ‘techie’ and I didn’t want to do it but Mrs. T (Trimmer) and Tim, who was our director last year who came in to help us, pushed me to get involved. It’s really fun once you do it and it really opened me up to new experiences. So just try it, you never know what’s going to come out of it and how you’re going to feel at the end of it,” said McManus.

For those not so interested in pursuing a spotlight on the stage, there are many just as important people constantly working behind the scenes. Jonathan Otten, senior, has participated in technical theater since his freshman year. He was Technical Director last year and is again this school.

“Technical theater is the intersection of art and science, and it’s a great way to get involved at Athens. It’s a diverse field that ranges from lighting to makeup, from set design to sound design, and from painting to costuming,” said Otten.

The theater department at Athens Drive offers many great opportunities and students are always welcome to participate.