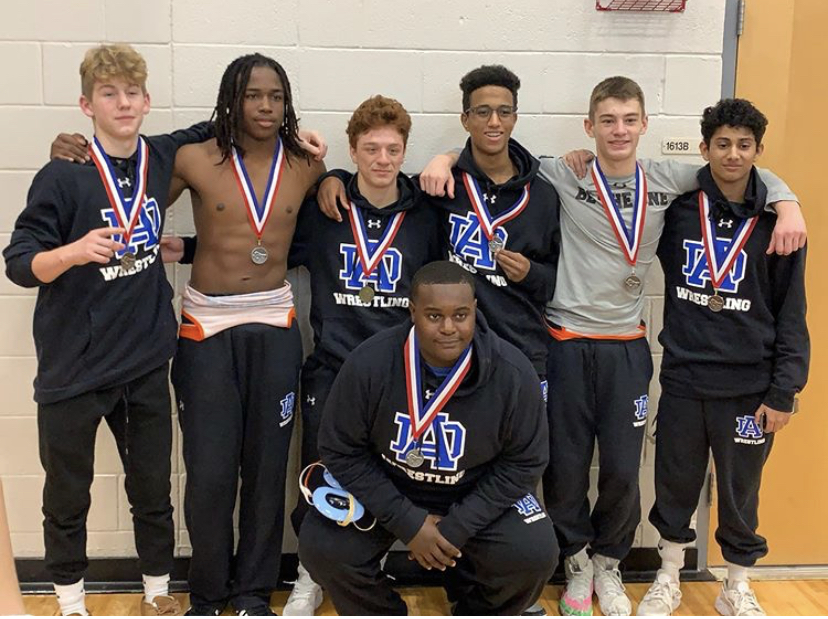 When people are asked to name winter sport teams, their first impulse is to list the different basketball teams. While this is true, one of the most underwatched sporting events at Athens Drive is the wrestling team. Consisting of 30 wrestlers, the team is very successful with a record of 9-1. Most of these wins have been won by a large margin.

“I love wrestling. I think anybody is capable to do it as long as they are committed” said Daniel Shoaf, junior.

Wrestling is a good sport for people with many different body types. Unlike basketball, where there is an advantage to being tall and muscular, wrestling has different weight classes so the wrestlers can be any size and they would be competing against someone of a similar stature. This attracts many varying individuals that want to play a sport but do not know what to play. By joining this team as a freshman, Shoaf was able to learn some basic wrestling moves prior to his first match with the direction and support of the coaching staff. Since that time, he has improved immensely and is now one of the leaders on the team.

As they have done in the past, Athens Drive High School hosted the 2019 WRAL Wrestling Invitational. WRAL-TV and Capitol Broadcasting Company has sponsored this event in Raleigh since 1972 and it has been at Athens Drive High School several times. This two day event was held on Friday, Dec. 13, 2019 and Saturday, Dec. 14, 2019, featuring wrestlers from all across the state, including many state and conference champions as well as Virginia and South Carolina. This event was the first time the WRAL Wrestling Invitational included a women’s division. The event began with a weigh-in immediately after school on December 13. The championships were held on December 14, 2019, with the women’s finals commencing first followed by the men’s championship.

“It was really exciting to go out and watch my friends compete. This was an even bigger deal because it involved WRAL,” said Ryan Weiner, junior.

ADHS 2019-2020 wrestling team has continued the school’s legacy by their hard work and dedication both on and off the mat. The team finished 11 out 36 teams at the WRAL Invitational.  This was the best finish for Athens Drive since 1980. Athens has been involved in matches with primarily non-conference teams thus far. The remaining season will include matches against the other members of the 4A Triangle 6 Conference, including Panther Creek, Jordan, Green Hope and Riverside. Their final match of the season will be against their arch rival, Cary High School.  The Athens Drive wrestling team has had a successful start to the season and are looking forward to the rest of the year.