Athens Drive Health Science Career Academy focuses on skills regarding technology and engineering to prepare students for an education and jobs in the healthcare field. The academy involves a multitude of classes related to the field, internship and volunteer opportunities, clubs, and teachers and administrators who take a special interest in their students and their goals. Internships are offered year long for students in any grade, but juniors are required to accomplish a summer internship in the area of their choice.  They must then accumulate information from the summer and make a presentation about their internship.

“The Health Science Career Academy comprises of three pathways, Medical Sciences, Public Safety-EMT and Agricultural Sciences. Our programs include articulated credit and course offered at the community college level. Our program is the oldest in Wake County Public Schools and was founded in 1990 based on the projections of the future of healthcare in the Raleigh-Durham area,” said Jennifer Hulsey, Program director.

Caroline Almasri is currently a senior in both the Health Science Academy and STEM Academy. Almasri did not have an average beginning to her high school experience, moving to Athens from a school in Syria. She was not aware of the magnet opportunity or the many academies since magnet schools were not common where she grew up.

Since Almasri was unaware of the academy and did not pre-apply, Hulsey helped her join midyear.

“She helped me change my schedule and get me into Health Science I with Mrs. Worrell. This is really where I started to have a deep love for medicine. Mrs. Worrell was also an incredible teacher and role model. Through that class, I would go to Mrs. Hulsey and tell her how much I loved it and we would talk about possible professions and internships,” said Almasri.

Almasri completed her internship at Wake Med Hospital in Raleigh. The internship was a prestigious surgical experience that most students do not get accepted into. Knowing this, Almasri started early to make it to her goal.

“ I learned about it from talking to Ahmad Odeh, the intern to Dr. Charles Harr at the time and the president of HOSA which is where I met him. He told me about it, and I found it incredible, so I went and spoke to Mrs. Hulsey, and she told me it would be a lot of work and I would have to be completely dedicated to the internship. I told her I would do whatever she needed or wanted me to do in order to qualify as a candidate. From then, I helped with Magnet tours, open houses and other Health Science Academy related events every time they came up. I went above that and even helped with the Red Cord Ceremony for the seniors and helped Mrs. Hulsey with any small task that she asked me to do,” said Almasri.

When she became eligible for the internship her junior year, Almasri gave her resume to Hulsey who showed it to Dr. Harr, a chief medical officer at WakeMed hospitals in the area. She soon got the news that she was chosen to intern with Dr. Harr in the cardiothoracic department. The first day of her internship was a clutter of emotions: fear, excitement, uncertainty.

“I was hesitant at first. I wasn’t exactly sure I’d enjoy the surgeries but I knew I wanted to be in the medical field,” said Almasri.

Since she was a minor her role in the hospital was limited due to laws as well as the safety of patients. Almasri had the chance to observe surgeries, ask questions, help patients with tasks they couldn’t do themselves.

“I saw a few surgeries with Dr. Harr, it was amazing he’d let you get so close to the patient and see exactly what was happening and ask questions,” said Almasri.

Almasri floated around surgeries as well as doing morning rounds to get up to speed on the patients and their conditions.

“I was actually really shocked because the terminology they were using, all the acronyms I learned in health science 1 and 2,” said Almasri.

The first surgery she observed was a Coronary artery bypass grafting or CABG. This is an open heart procedure to restore blood flow in an obstructed coronary artery. She assisted Dr. Williams and Dr. Upham. She was given scrubs and a front-row seat to the surgery.

“I stood at the head of the table where the patient’s head was they had this cover above them. I could look down and actually see this person’s open chest. It was crazy, I saw the procedure from the beginning to the end,” said Almasri.

Transitioning from medical textbooks and diagrams to real surgery was a little overwhelming for her. Along with the size of the hospital, all the new people and the face to face with the anatomy of the human body, Almasri had a lot to get used to. But after the first-day jitters and the shock of the surgeries, she began to settle in and really enjoy the work.

“My first surgery was absolutely incredible I can’t even describe in words how much it impacted me. I think it was that day I realized I wanted to be a cardiothoracic surgeon it was pretty set from then,” said Almasri.

Even with her specialty in mind, she got to sit in on surgeries of different professions.

“I watched two c sections, the first one the mother was alone so after they had finished the c section and the baby was out they had her with the doctors sitting in the crib far away from her mom and I could see that the mom was really trying to look over at her while she was getting checked. So I asked her if she wanted me to hold her baby for her in the chair next to her and she said yes so I sat there in the chair next to her hospital bed and held her baby,” said Almasri.

By the time her internship was over, Almasri had decided she wanted to be a surgeon, and even knew which specialty she favored.

“It was probably the most clarifying moment of my life, to know exactly what you want to do and have your goals set is just not something everyone gets to have and I feel very blessed to be able to have that,” said Almasri. 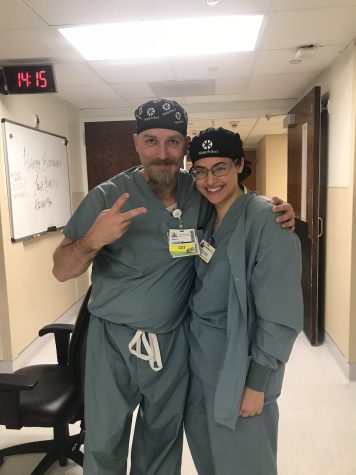 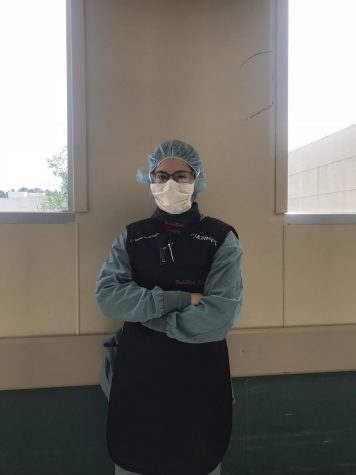