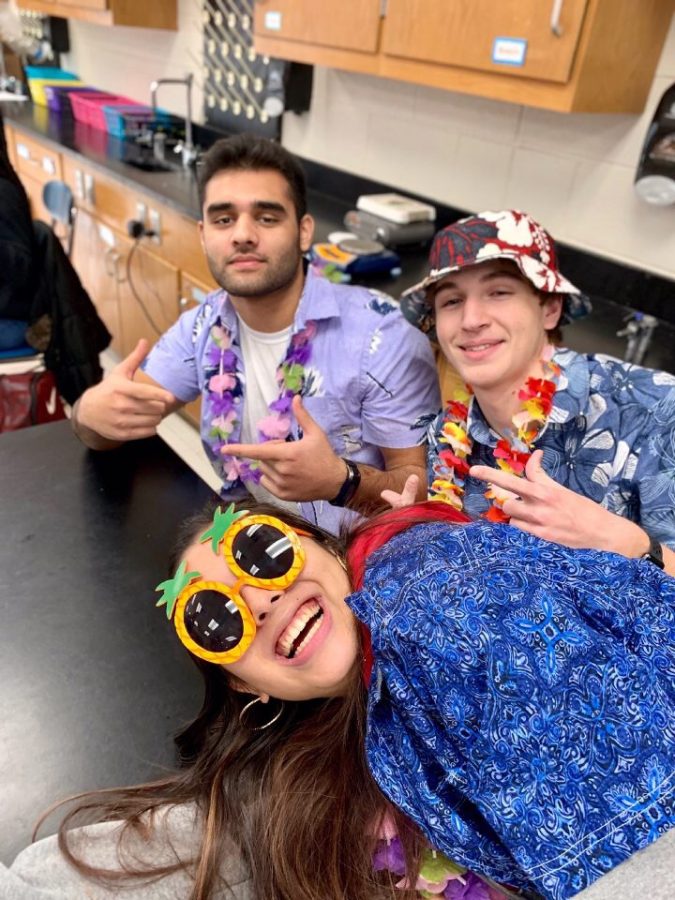 From left to right: Aadil Mehasnewala, Amira Tremelling, and Charlie Morlock dress up for Tropical Tuesday. Provided by Katie Vick

Athens Drive students gathered together for a pep rally to gain enthusiasm for the school’s basketball game against Cary High School Feb. 1, 2019. The week leading up to the pep rally students participated in spirit week, where students are encouraged to dress up in a certain theme to show school spirit.

Monday’s theme for spirit week was America Monday where students were encouraged to dress in red, white, and blue. On that Tuesday, the theme was tropical Tuesday with students wearing hawaiian and floral shirts. Wednesday’s theme was memes, Thursday was jersey day, and Friday’s theme was to wear Athens’ colors; blue and orange.

The pep rally began with senior Vishal Kasula singing the national anthem. Performances from Athens’ gradman and the dance, step, and cheerleading teams were also shown.

“The dance team’s performance was a combination of routines from the girls themselves. Jenna Hollenhead and Delaney Leierzapf choreographed the part to Taki Taki and captains Colby Summers and Abby White came up with the section to the song I Like it,” said Lauren Pipal, Dance Team sponsor.

Rocco Nociti, student body president and gradman member, along with the student council, are in charge of planning out the events of the entire Homecoming week, including spirit week and the pep rally. As a whole, the student council spreads the word about the pep rally by making posters and placing banners above the gym’s bleachers.

The vice president is in charge of working with all the teams and performers, planning all events, and leading the pep rally committee. Buscher also wrote the script from which the pep rally announcer, Caroline Post, read from.

Gradman students practiced their performance dances for four weeks prior to the pep rally. Seniors Colby Summers, Shelby Hinshaw, and Abby White were the choreographers responsible for the gradman dances. Their performances were a small portion of the gradman show that will be presented April 11, 2019 and were meant to encourage people to come to the event.

“I was really proud of the boys and their performance. They did great,” said Remaley.

Gradman is composed of seniors who were given certain superlatives which was voted on by the senior class back in December. The 12 various categories are: Mr. Funny, Mr. Intelligent, Mr. Cute, Mr. Best all around, Mr. Nice and sweet, Mr. Involved, Mr. Individualistic, Mr. Athletic, Mr. Artistic, Mr. Musical, Mr. School spirited, and Mr. Preppy.
“Performing at the pep rally with a great group of guys was actually really fun. Seeing the crowds reaction to our performance was hilarious, and made it an experience we’ll all look back on in the future. Everybody was into it” said Nociti.