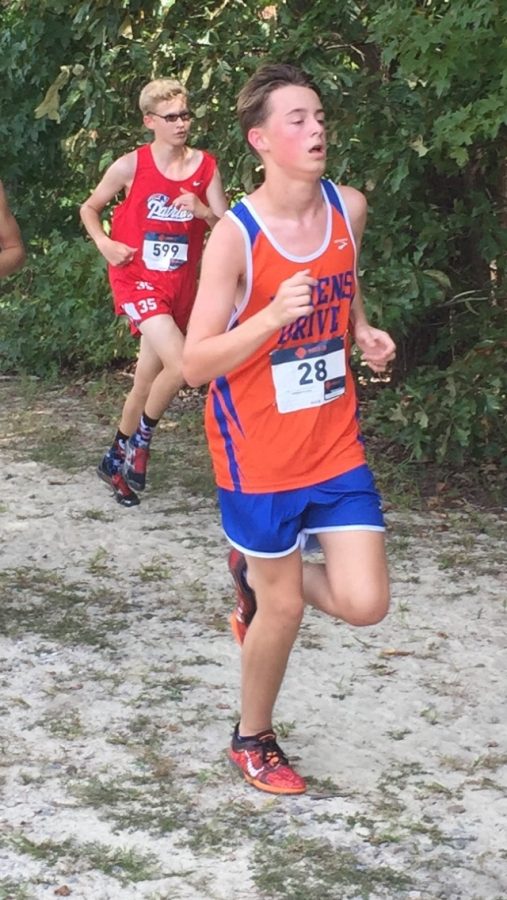 Cross country is a sport where individuals or teams race on open terrain, such as grass or dirt, over long distances. Athletes run in all types of weather, ranging from heat to a downpour. The Athens Drive Cross Country Team usually runs 5 kilometer races at Lake Johnson and at WakeMed Soccer Park.
“I run cross country because it’s fun to meet new people and it’s really rewarding after you finish a run,” said Carson Hughes, sophomore.
The team also has “chowdowns” every night before races. “Chowdowns” are team dinners where the team eats together and hangs out with each other, creating good team chemistry and relaxing them before the race.
Motivation is important to keep running. To motivate themselves people run with friends and tell themselves there is only a bit left or how the faster they finish the sooner they stop running sooner.
“I motivate myself by focusing on what my goals are,” said William Burke, junior.
To motivate themselves, the team runs together in practices and meets to encourage each other so they can better times, and win more meets.
“I like to finish quicker, so I don’t have to run as long,” said Hughes.
According to the runners getting a personal best on a run is one of the best feelings one can get.
Runners have to motivate themself to achieve good scores for their team and so they can finish earlier to stop running.
“When I run, I think about the finish, how my legs are hurting, and how I would really like a drink of water,” said William Shearin, sophomore.
Running with friends can motivate one to push themself so they can stay with them.
“I really hate falling behind, because then I know I’m not doing my best,” said Hughes.
This year the Athens Drive Cross Country team hopes to outperform other schools teams, and to hopefully be the best in the conference, the Triangle-6.